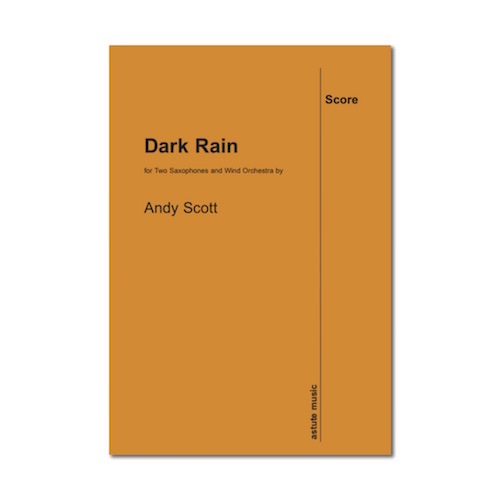 Composer: Andy Scott
Instrumentation: saxophone concerto
Size: 1 x A4 score @ 56 pages
Total Duration: 18 minutes
Astute code: am104-02
ISMN: 979 0 57031 055 5
Add to Cart
Winner of the British Composer Awards 2006
Wind Band or Brass Band
​for this piece: Dark Rain
A3 score available - click here​
Concerto for Two Saxophones and Wind Band (or Orchestra)
Two equal solo saxophone parts Also available
This concerto pays homage to the versatility of the saxophone and the different styles of writing for the instrument. It is in one continuous movement and after a dramatic opening exclamation from the two soloists, journeys through a collision of contemporary classical, bebop, big band and swing before concluding with a release of tension in a final slower section.

'The writing of this concerto took up most of the summer of 2005, during which time was the 60th anniversary of Hiroshima’s destruction. In 1985 whilst on tour in Japan with the Apollo Saxophone Quartet I visited the Hiroshima Peace Memorial Museum. My experience on that visit from witnessing the devastation mankind can inflict on itself to the overwhelming quest for peace was profound. What affected me were ordinary peoples stories of that fateful day and the effect of the dark rain. At first thought by the survivors to be a salvation from the heavens after the heat of the inferno had dried up all water, the black raindrops were radioactive and many died later from it’s affects.
Whilst this double saxophone concerto is not meant to be a “war” or “peace” concerto, it does due to the period it was written in naturally convey an overall yearning for peace. This culminates in the final chorale section after the tension created by the two soloists working in tandem and individually journey though the different styles throughout this piece.'
Andy Scott