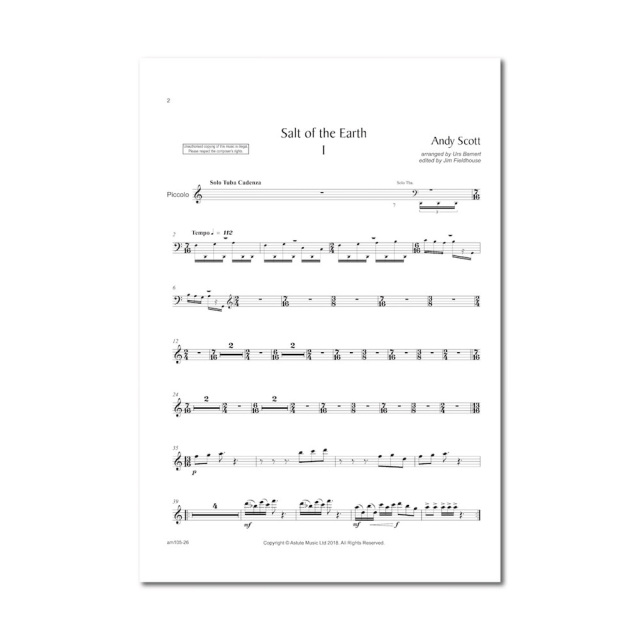 Add to Cart
Score, solo part & band parts sold separately. Score available here. Solo part available here
An Eb Bass version of the solo part is now available as a download only here
A blues-tinged tuba cadenza opens Salt of the Earth before moving into a Bulgarian-like folk theme, which alternates with a heavier funk feel. The two multiphonics that frame the movement are inspired by a cadenza that the late great saxophonist Michael Brecker played on the album 'Some Skunk Funk'. The slower second movement is gospel-influenced, the seven-bar melody being passed around different soloists whilst the solo tuba weaves in and out of the melody in an almost improvisatory way. The third and final movement of Salt of the Earth is an explosion of big band latin-jazz, led from the front by the solo tuba!

Composed by Andy Scott for Leslie Neish and the Fodens Band with funds made available from the BBC Fame Academy Education Bursary, and the Worshipful Company of Musicians, in recognition of the composer's success in winning the award in the Wind Band & Brass Band section of the 2006 British Composer Awards. The World Premiere performance was given by Leslie Neish and Fodens Band on Sunday 27th January 2008 at the Royal Northern College of Music Festival of Brass, Manchester UK.

Subsequently arranged for Wind Band by Urs Bamert and edited by Jim Fieldhouse, the Wind Band version was given a premiere by Les Neish and Maidstone Wind Symphony, conducted by Jonathan Crowhurst, and recorded by the same personnel on the CD Roar! – the Wind Band Music of Andy Scott in October 2016. This CD is available to purchase HERE from www.andyscott.org.uk