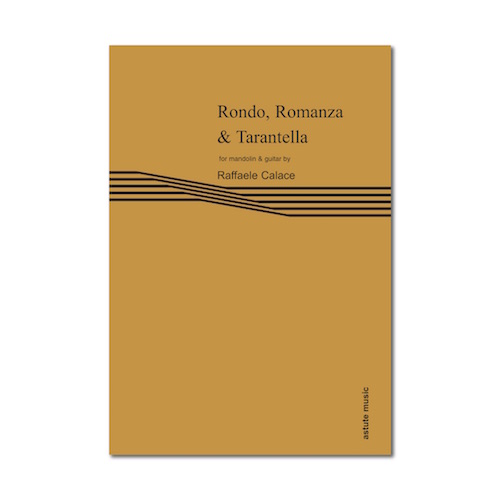 Composer: Raffaele Calace
Edited by: Alison Stephens
Instrumentation: mandolin & guitar
Mandolin Grading: Intermediate
Size: Pages: score 13 pages - 2 parts (8 pages & 7 pages)
Total Duration: N/A
Astute code: am514-14
ISMN: 979 0 57031 080 7
Download available HERE
Add to Cart
Three of Calace’s most popular and accessible Intermediate level pieces.Calace wrote over 170 pieces for mandolin altogether ranging from easy Waltzes (also available from Astute: 4 Easy Waltzes for Mandolin solo with optional guitar accompaniment) through to his two large scale and challenging Concerti. Much of his music is whimsical, charming and, occasionally, frivolous; but he has also written many emotionally charged pieces of some substance.
These are three of Calace’s most popular and accessible Intermediate level pieces. Some of Calace’s pieces for mandolin and piano had alternative guitar parts written by the composer, but many have been arranged with guitar parts over the years by different players and publishers. All three of these pieces work equally well with either piano or guitar accompaniment. Each piece throws up its own challenges for the player and can be treated in different ways according to the player’s individual abilities. Above all, each of these three pieces is fun and rewarding to play.
​
Performance Note: I have endeavoured to be faithful to Calace’s original tempo and dynamic markings. However, in several instances I have added my own markings to add more interest or to clarify the commonly used musical approach. Any editorial markings are in square brackets e.g. [accel.].
During Calace’s lifetime tremolo was very popular and was used on all kinds of phrases. However, these pieces work very well with lots of different approaches to tremolo; if the player is very competent then there are many places when tremolo can be utilised to great effect, but if the player is less confident or would like to try a fresher, different approach then these pieces can benefit from a more judicial use of tremolo. For these reasons, I have not in any way suggested where to, or where not to, use tremolo beyond Calace’s own original phrasing marks. It is worth noting that staccato marks were often used in this period of writing to indicate “non tremolo” and not necessarily the true meaning of the marking.
There are also a multitude of opportunities for using position playing and alternative fingering in these pieces. Again, for this reason I have used fingering and position markings sparingly. Players capable of playing these pieces should be at a stage in their ability when they can make these decisions for themselves and also explore many different options. Alison Stephens